prettyping is a wrapper around the standard ping tool, making the output prettier, more colorful, more compact, and easier to read.

View prettyping on GitHub
Donation - buy me a coffee

Do you run ping tool very often? Do you find yourself squeezing your eyes to see if a packet has been lost? Do you want to have a better view of the latency and of the lost packets over time?

Then prettyping is the tool for you!

prettyping runs the standard ping in background and parses its output, showing ping responses in a graphical way at the terminal (by using colors and Unicode characters). Don’t have support for UTF-8 in your terminal? No problem, you can disable it and use standard ASCII characters instead. Don’t have support for colors? No problem, you can also disable them.

prettyping is written in bash and awk, and should work out-of-the-box in most systems (Linux, BSD, Mac OS X, …). It is self-contained in only one file, so it is trivial to install and run.

Check out the prettyping repository on GitHub.

Animated GIF (sped up to 4×) showing what prettyping can do:

Very old screenshot, showing how prettyping looked like in 2008: 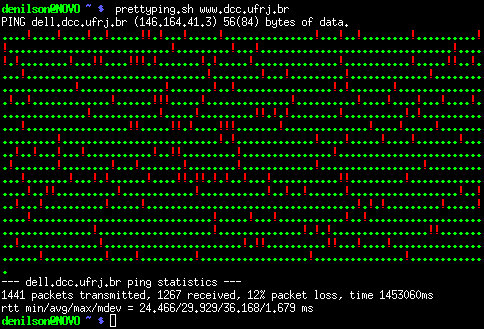 I don’t see the block characters, all I see are weird characters such as “â..”.

Your terminal does not seem to support UTF-8. Configure your terminal correctly, switch to another terminal, or just use the --nounicode option. Also, do not copy-paste the code from the browser, download it instead.

What if I am using PuTTY?

Inside Window → Translation, set the remote character set to UTF-8 (as in this screenshot by battery_go user on reddit).

A bit of history

prettyping was originally written in January of 2008, while I was working at Vialink. I noticed that, very often, we were looking at the output of the ping tool to measure the quality of network links, by looking at a combination of packet loss ratio and latency. However, the standard ping output is too verbose, making it hard to have a quick glance at latency. Not just that, but missing/lost packets are not reported at all. Finally, the statistics of the run are only printed at the very end, after ping finishes running. This helpful piece of information should be available all the time.

I observed a common use-case, a common pattern in our daily work, and I noticed that our workflow could have been improved by having better tools. And so I built a better tool. (By the way, this paragraph describes something I do ALL the time.)

Thus prettyping was born. And it received essentially no updates after 2008.

In October 2013, I discovered the spark shell script in github, which made me want to implement a similar output in prettyping. After a few days, I had implemented many features I wanted to implement for a long time, in addition to the spark-like output. After finishing all these features and polishing them, I submitted this tool to reddit /r/linux and to /r/commandline and received a lot of positive feedback.

Afterwards, it was fixed to works on multiple awk implementations, to work on Mac OS X (in addition to Linux). People have even made packages for some Linux distros and for Mac OS X brew.

In October 2015, someone else submitted this tool to Hacker News, and it managed to get to the front page!